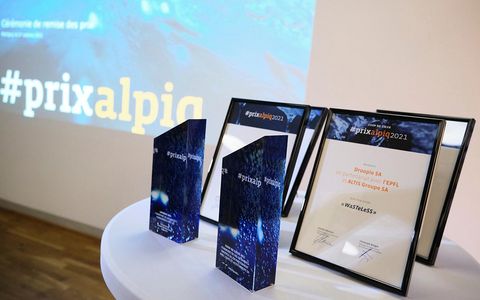 Lausanne – Alpiq and the Association of Concession-Granting Municipalities of Valais (ACC) today announced the winners of the first ever #prixalpiq during an award ceremony at the Foire du Valais in Martigny. The winning project, “Erneuerung Gesamt-Bewässerung Salgesch” (renewal of the entire irrigation system in Salquenen​), will reduce the municipality of Salquenen’s agricultural water consumption by up to 40%. As the “winner of hearts”, the jury selected the “WaSTeLeSS” project from Val de Bagnes, which is pursuing an innovative solution to reduce water wastage. The winning project was awarded CHF 40,000 and the “winner of hearts” CHF 10,000.

Alpiq, together with ACC, today announced the winners of the first #prixalpiq at an awards ceremony at the Foire du Valais public exhibition. Antje Kanngiesser, CEO of Alpiq, Amédée Murisier, Head of Hydropower Generation at Alpiq, Christoph Bürgin, President of the ACC, and Vice-President David Melly personally thanked the participants and announced the winning projects. Antje Kanngiesser said: “The #prixalpiq is intended to inspire us. Water is life, space and energy. It takes a vision, courage and a sense of community to make optimal use of this precious resource and to protect it.” Christoph Bürgin stated: “We are delighted with both the number and quality of the submitted projects. All of them offer solutions that optimise water management and contribute to the conservation of water in the canton of Valais.”

The winning project “Erneuerung Gesamt-Bewässerung Salgesch” (renewal of the entire irrigation system in Salquenen), which was developed by Cordonier & Rey SA and the municipality of Salquenen, aims to solve the municipality’s water shortage issues. Once implemented, the project will reduce the water consumption in local agriculture by up to 40%. The #prixalpiq prize of CHF 40,000 will be used for the implementation of a pilot project for a new irrigation system: This involves replacing the outdated irrigation systems with an innovative drip irrigation solution, coupled with a water treatment system that measures soil moisture in real time and provides access to a coordinated irrigation program (Aqua4D technology).
This irrigation project will have a lasting impact on how water is managed in the municipality of Salquenen. It will also encourage other municipalities to work together to find solutions to face the consequences of climate change.

The “winner of hearts” – the “WaSTeLeSS” project – entails a digital platform that monitors, manages and optimises drinking water consumption. This platform will be used to raise awareness among the population of Val de Bagnes for the responsible use of water. This project, which is being funded by the municipality of Val de Bagnes, was developed by Droople SA in collaboration with the Swiss Federal Institute of Technology (EPFL) and the ALTIS Groupe SA. The prize of 10,000 Swiss francs will allow them to install the digital platform in various public buildings, including the Espace Saint-Marc cultural centre in Le Châble, which attracts some 40,000 visitors a year. On average, this is expected to reduce the total water consumption in the buildings by some 20%. Users will be provided with information about the amount of water they consume and thus become more aware of the impact of their own behaviour.

The #prixalpiq brought together 18 projects promoting sustainable water management supported by 21 municipalities in the canton of Valais. They address a wide range of issues touching on topics such as agriculture, energy and water treatment. They propose concrete solutions for irrigation, access to drinking water, wastewater disposal, reduction of water pollution, energy generation and automation with the aim of preserving water resources and optimising water management. A jury of twelve well-known personalities from the canton of Valais selected the winning projects based on criteria such as sustainability, feasibility, benefits for the municipalities and innovativeness.

#prixalpiq was launched in October 2020 by Alpiq in collaboration with the ACC. This award is a response to the challenges that the canton of Valais, Switzerland’s water reservoir, is facing today when it comes to the conservation and management of water as a resource. It provides concrete support to Valais municipalities in their efforts to achieve efficient water management, it demonstrates sustainable solutions and it generates a tangible and positive impact in the municipalities.

Learn more about the #prixalpiq at www.prixalpiq.ch
Find more information about Alpiq on www.alpiq.com
Find out more about the Association of Concession-Granting Municipalities of Valais (Association des communes concédantes du Valais; ACC) on www.accvs.ch

This first ever #prixalpiq was realised in collaboration with the BlueArk Challenge. The media partners Le Nouvelliste, Rhône FM and Radio Rottu Oberwallis supported the communications activities relating to the prize.