Starting today, Alpiq is pouring a total of 6000 m3 of gravel into the Aare below the Ruppoldingen hydropower plant over around ten days. The aim is to maintain a dynamic river landscape with ample habitats for animal and plant species. 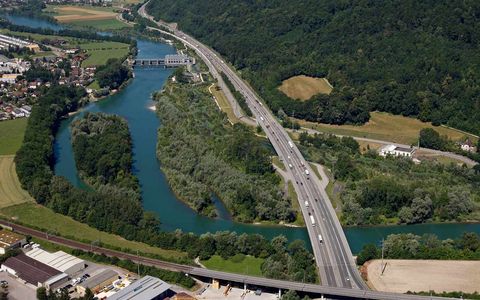 Rivers often have insufficient bedload below hydropower plants. This also applies to the Aare below the Ruppoldingen hydropower plant, which has been producing environmentally friendly electricity from renewable energy for more than 20 years, and has had the ‘naturemade star’ label since 2010. The phenomenon can be corrected by adding gravel to ecologically upgrade the river bed: the gravel creates dynamic structures, enhances the habitats for animals and plants and reduces erosion of the river bed. As the operator of the Ruppoldingen run-of-river power plant, Alpiq decided on an initial gravel pour of 6000 m3 in cooperation with the cantons of Solothurn and Aargau and the Federal Office for the Environment. Additional pours will follow in the next few years.

The first pour is due to start this Monday and will take around ten days. The gravel comes from Aarau, and will be poured right by the western pillar of the A1/A2 motorway bridge opposite the confluence of the Pfaffnern into the Aare. The material will be delivered in around 500 motorway trips. Lorries will access the area via the motorway service ramps west of the bridge.

The 6000 m3 of gravel will create a gravel island around 120 metres long in the area of the bridge pillar. When the Aare carries a lot of water, the gravel will be washed downriver and thus gradually distributed on the river bed below the power station. The gravel deposit will diminish over time, and will need to be refilled before it disappears completely. This will ensure that the bedload is regularly transported along the Aare. The experts assume that new gravel will only become necessary after over a year.

The artificial addition of gravel will help remedy the bedload deficit in the Aare. Bed debris enhances the aquatic habitats for fish, macro-invertebrates and plants in the rivers. The macro-invertebrates are important links in the food chain. These include insects and their larvae, amphipods, mites, snails and mussels, leeches and worms. These small animals colonise the river bed, as well as mosses and algae.

Restoring the Aare’s bedload dynamics will also have a positive effect on fish stocks: the gravel will create new habitats especially for fish such as grayling, nase, barbel and trout, which spawn on gravelly substrates. Further natural structures and diverse habitats will develop in the Aare due to the bedload pour and the resulting bedload dynamic.