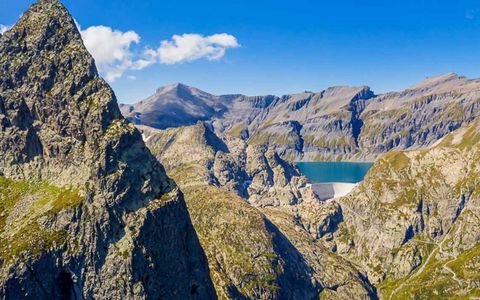 With its storage capacity of 20 million kWh, the Vieux Emosson reservoir is an integral part of the Nant de Drance pumped storage power plant.

Lausanne – The Russian invasion of Ukraine has shaken the energy markets to their very core. The effects this is having on the market are unprecedented in scale. In just a few months the energy world has changed dramatically. In this highly turbulent environment, Alpiq managed to significantly improve its operating performance, with adjusted EBITDA reaching CHF 114 million in the first half of 2022 (2021: CHF 83 million). This is an increase of 37 % on the previous-year period. Its focus on excellent availability and competent management of the flexible and efficient power plant portfolio together with successful trade and portfolio management for its customers resulted in improved performance despite the challenging environment. Extreme price increases on the energy markets caused adjusted net revenue to more than double compared to the previous year, increasing from CHF 2.7 billion to CHF 6.9 billion. At the same time, Alpiq was able to mitigate the risks despite unprecedented price distortions on the international energy exchanges. The exceptional volatility and extreme price increases led to significantly higher security payments for the hedged production volumes. These securities are temporary in nature and will thus return in full once the deals get into delivery.

“In this highly challenging environment, we were able to increase our operating performance, strengthen our own contributions to the security of supply and, at the same time, we did important structural groundwork for the future.”

After around 14 years under construction, Alpiq together with its partners successfully put the Nant de Drance pumped storage power plant into operation at the beginning of July. Thanks to its extreme flexibility and 900 MW installed capacity, the power plant is making a significant contribution to the integration of renewable energies in the energy system. The six machines can switch from turbine operation to pump operation within a very short space of time. This successfully concluded project shows that Alpiq has the power to implement major complex projects in a highly professional manner and also to defy adverse market conditions. From today’s perspective, the pumped storage power plant is an essential cog in the wheel for ensuring security of supply and grid stability in Switzerland and in the surrounding countries.

Alpiq commanded good prices with its Swiss hydropower plants. As a result, it was able to compensate for the higher costs associated with the commissioning of the Nant de Drance pumped storage power plant. The Gösgen and Leibstadt nuclear power plants demonstrated high availability in the first half of the year, generating over 8 % more electricity than in the previous-year period. The overhaul of the Gösgen nuclear power plant, the management of which is the responsibility of Alpiq, was completed on time and within budget thanks to the outstanding commitment of the teams involved. Due to the low availability of the French nuclear power plants, the procurement rights from France could only correspond to a historical low level of energy deliveries. This will have an impact on the result in the current and potentially also the coming year, as this energy will have to be procured elsewhere. However, thanks to lower costs and higher production volumes at the plants in Gösgen and Leibstadt, Alpiq was able to more than compensate for this effect. Internationally, the gas-fired power plants operated by Alpiq in Hungary and Italy, with their extremely high availability of almost 98 %, showed once again that they make significant contributions to security of supply and system stability of the grids. Since the beginning of the year, the Plana del Vent power plant in Spain has also resumed stable operations after undergoing repairs.

“We see it as our task to contribute to security of supply and to climate protection – from production right through to the consumer. We create value along the entire value chain – for our customers, employees, shareholders and society.”

To further strengthen the resilience of the company, Alpiq will adopt an integrated view on value creation across business divisions, instead of looking at them individually. For the financial year 2023, steering and reporting will follow the value flows from production via trading to supply. This reflects one of the company’s values: Everyone works for a common greater goal. Rethinking, simplifying and streamlining processes accordingly is designed to drive speed, quality and personal impact in line with Alpiq’s aspired value-driven and purpose-led culture.

Extreme prices and the high volatility on the European energy markets have greatly increased liquidity needs for the entire industry. Energy producers, in particular, must temporarily make high security deposits for the production they sell. However, the company receives these back in full once the contract has been fulfilled.

“Since the beginning of the year, security deposits have increased almost five-fold. We have successfully implemented extensive operating measures in the energy business and obtained additional financing in the credit and capital market to always ensure the necessary liquidity. These measures are showing the desired effect. With additional guarantee and credit lines as well as two bonds successfully placed on the capital market, we have been able to maintain our financial headroom at a safe level.”

Given the insecurity of further market developments a temporary support scheme against a possible systemic market failure – like neighbouring countries already put in place – will help to stabilize the market and contribute to security of supply in Switzerland.

The sword of Damocles of gas supply being cut continues to hang over Europe and is pushing prices further up. For the coming winter, there is the threat of a gas shortage and, at the same time, an electricity shortage because a large number of nuclear power plants in France have been shut down. Given the dynamic market development, Alpiq expects further growth for the full year 2022 at the level of adjusted EBITDA. However, due to the exceptionally strong fluctuations in the fair value of Alpiq’s commercial portfolio in conjunction with potentially negative decommissioning and waste disposal funds (STENFO) performance, Alpiq cannot assume with certainty that it will achieve a positive net result (IFRS) by the end of the year.

The dossier, as well as the direct link to the online Interim Report are available here:

Message for the media:

Between 9:00 a.m. and 9:45 a.m., Alpiq is offering the opportunity to participate in a brief Teams call with CEO Antje Kanngiesser and CFO Luca Baroni to explain the figures for the first half of the year.

Journalists can obtain the link to dial in at mediamail@alpiqweb.com